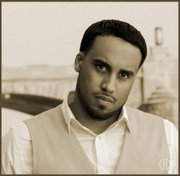 Harrisburg resident Michael Giovanni isn’t real proud of how he spent some of his youth. “All we knew was just doing illegal stuff to make money to dress nice and play basketball and chase girls,” he says. When he decided that he needed to change, he got involved in a church group which took him to other countries to help do things like build water systems and medical centers in poorer countries. But Michael himself was also the recipient of some help in a rather unexpected way. One day at his job at a shoe store in the Harrisburg Mall, actor Michael Kenneth Williams who played Omar Little on HBO’s The Wire walked in. While Giovanni was helping him, Williams offered him the chance to get into acting.

Now Michael’s been involved in productions ranging from The Wire to Tyler Perry’s House of Pain and even Batman: The Dark Knight Rises. His latest effort is a web series that he has helped produce called Hamilton Street. It’s shot in Harrisburg and based on the city as well, and it’s Giovanni’s way of trying to give back to the community, both by addressing social problems and by the opportunities it gives other aspiring local actors.