Capitol Reform – This Time for Real?

“Money plays far too large of a role in public policy. Shining a light on how much and who gets it will go a long way to ensure more objective decision-making.” Words spoken by a good-government group? Nope. The speaker this week was State Sen. John Eichelberger, a Republican from Blair County. He’s part of a movement in the General Assembly to get serious about reform in the wake of corruption convictions, and yet more allegations of wrongdoing, among elected officials. We’ll take a closer look at cleaning up government on Smart Talk, tonight at 8 on witf-TV. Join the conversation – 1-800-729-7532. 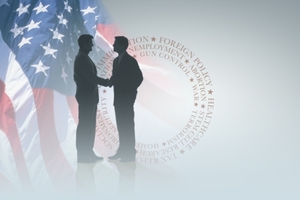 State Sen. Mike Stack, a Philadelphia Democrat, joined Eichelberger in calling for passage of nine bills to improve accountability and transparency in campaigns and government contracting. Their reform package would, among other things,ban lobbyists from owning a casino license, force state officials to forfeit their pay if they fail to adopt a state budget on time, preclude lobbyists from running a lawmaker’s campaign while lobbying him or her, tighten candidates’ reporting of gifts, require disclosure of contributions to the governor by members of his advisory commissions and task forces, and prohibit the governor, lieutenant governor and executive agency heads from accepting gifts from companies that do business with, or are regulated by, the state.

Stack said, “We have to work harder to make even the appearance of impropriety a thing of the past.” It seems everywhere one looks in the State Capitol, impropriety stares back. Stack and Eichelberger are the latest bipartisan duo to speak up for reform. State Sen. Rob Teplitz, a Democrat from Dauphin County, and State Rep. Bryan Cutler, a Republican from Lancaster County, recently announced the formation of a bicameral Government Reform Caucus.

Cutler wants a part-time legislature, merit-based gubernatorial and judicial appointments, and two-year state budgets. Barry Kauffman, executive director of Common Cause/Pennsylvania, and Eric Epstein, coordinator of Rock the Capital, both of which are citizen-driven government-watchdog groups, will share their thoughts on these reform efforts. You can join the conversation by calling in live at 8 tonight to 1-800-729-7532, email us at smarttalk@witf.org,post a comment here or to Facebook, or send us a Tweet.